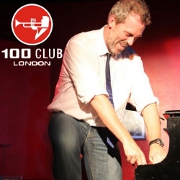 Stephen Fry has announced that he is working again with former comedy partner Hugh Laurie.

The pair, best known for their BBC sketch show A Bit of Fry & Laurie, will reunite for a "project" in the near future.


[i]1:16 PM - 14 Mai 12 [/i] @stephenfry hat geschrieben:"M'coll Hugh Laurie and I are cooking up a project together.
"We will be working again soon. Sorry to be mysterious but more news when I can."

The duo also starred alongside each other in sitcom Jeeves and Wooster between 1990 and 1993.

Their critically-acclaimed sketch show A Bit of Fry & Laurie ran for four series between 1989 and 1995.

Fry and Laurie reunited in 2010 for a GOLD retrospective, celebrating 30 years of their TV partnership.

Laurie, who is currently the highest-paid actor on US television, recently shot the final season of his hit Fox medical drama House.
Source: http://www.digitalspy.co.uk/showbiz/new ... oject.html

[i]10:04 AM - 15 Mai 12 [/i] @stephenfry hat geschrieben:M'coll Hugh & I will be working together to voice the new animated feature of Oscar Wilde’s THE CANTERVILLE GHOST: http://twitpic.com/9l9mgm

Oh my... I REALLY was able to snatch HIS beer glass. The one, of which he drank.
Nach oben

Re: The Canterville Ghost

Stephen Fry is to play the title character of the Canterville Ghost in a new CG animated feature film adaptation of the classic story from Oscar Wilde.

Fry will star alongside Hugh Laurie, marking the first time they will have worked together in over fifteen years.

The film is being produced by Gina Carter and Robert Chandler, a co-production between Fry’s own Sprout Pictures and Jerry Hibbert’s new animation company, D’Arblay Films.

It will be animated in London and Toronto. The Toronto studio is Arc Productions, the studio that animated Shane Acker’s 9 and Rocket Pictures’ Gnomeo & Juliet.

The film is being marketed as a family feature, for worldwide release at Christmas 2014.

THE CANTERVILLE GHOST is set in rural England at the end of the nineteenth century. For hundreds of years Sir Simon de Canterville has been haunting Canterville Chase with a certain Gothic panache. Everything changes when an American family – the Otises from Boston – buys Canterville Chase and moves in. The Otises refuse outright to be frightened by Sir Simon’s antics, forcing the hapless spirit to question his motives and come to terms with his own tragic past.

Sir Simon forms a bond with the family’s teenage daughter, Virginia. Together they set off on an adventure. They encounter a jovial gardener in the Canterville grounds, who turns out to be the grim spectre Death. Virginia and Sir Simon challenge Death to a spectacular duel for the right to re-unite Sir Simon with his beautiful, loving wife, Eleanor. If Sir Simon and Virginia lose the duel, however, they will be trapped as spirits in the grounds of Canterville forever…

Oh my... I REALLY was able to snatch HIS beer glass. The one, of which he drank.
Nach oben
Antworten
2 Beiträge Seite 1 von 1
Zurück zu „Dr. Gregory House (Hugh Laurie)“